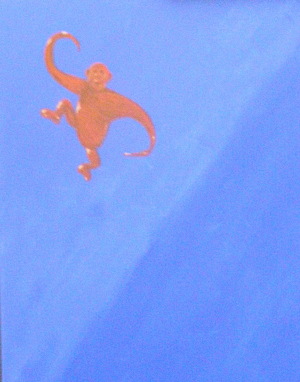 From July 14 through August 24, the cafe features art from two Greenbelters, Lori and John Martin.

Ms. Martin exhibits her work in the front room. Working out of the open studio at the Greenbelt Community Center, she explores primarily celestial themes, setting both heavenly bodies and spacecraft against a rich, inky backdrop.

In the cafe’s back room, John displays a variety of paintings, featuring architectural and nautical motifs. Mr. Martin’s other graphic works include photos of colorful fire hydrants, as well as some of Greenbelt’s varied playground equipment.

Join us for the opening for this exhibit on August 23 from 7 to 9 pm. Music will be provided by harpist April Stace Vega. Ms. Vega plays classical, jazz, and original music, both as a solo artist and as a member of the group Harp 46. April and her band have been warmly received during past performances at the New Deal Cafe.