The United States of ALEC 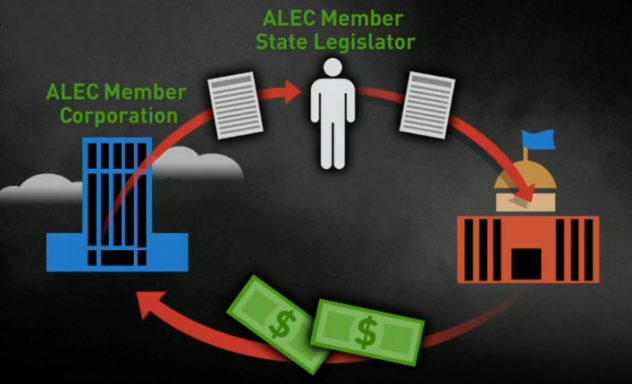 The United States of ALEC is described as “a report on the most influential corporate-funded political force most of America has never heard of — ALEC, the American Legislative Exchange Council.” Behind this national consortium of state politicians and powerful corporations lies a vast network of corporate lobbying and political action aimed at raising corporate profits at public expense without public knowledge.

Produced in 2012 by legendary journalist Bill Moyers, the film depicts how the secretive body helps corporate America propose and even draft legislation for states across the country. ALEC brings together major U.S. corporations and right-wing legislators to craft and vote on “model” bills behind closed doors. It has come under increasing scrutiny for its role in promoting controversial legislation such as “stand your ground” gun laws, voter suppression bills, and union-busting policies. Although billing itself as a “nonpartisan public-private partnership,” ALEC in fact is a national network that promotes mainly corporate interests. It’s currently advocating a bill that would punish banks for divesting from fossil fuel, according to journalist Alex Kotch.

The film will be followed by a discussion led by David Armiak, research director with the Center for Media and Democracy.

This will be a hybrid event, beginning at 7 p.m. either live in the New Deal Cafe or via Zoom. Virtual attendance requires registration via https://tinyurl.com/ReelnMealMay16. Greenbelt’s Co-op Grocery will offer a vegan meal for $7.99 for virtual participants. This month’s selection is Macro Vegetarian Creamy Cashew Carbonara with Tofurkey Sausage and a side salad. Phone in pre-orders to 301-474-0522 by 1 p.m. on May 16 for pick-up between 4 p.m. and 7 p.m. at the deli. There may also be dinners on a walk-in basis. Those attending in-person are encouraged but not required to purchase a meal at the cafe. There a UV light filtration system that kills viruses is used, and those present are asked to wear a mask and show proof of vaccination. Cafe attendees can enjoy the new wide-screen film projection system.