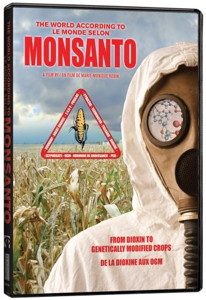 The documentary The World According to Monsanto will be shown Monday, April 19th. The film is the work of celebrated award-winning French filmmaker Marie-Monique Robin, whose three years of work on four continents investigates Monsanto and its corporate influence on government and technology. Combining secret documents with accounts by victims, scientists and policy makers, she guides us through a path of misleading reports, pressure tactics, collusion, and attempted corruption. And we learn how the company systematically tricked governments into allowing dangerous genetically modified (GM) foods into our diet—with Monsanto in charge of determining if they’re safe.

The film highlights the company’s production of substances including PCBs, pesticides, and genetically modified organisms which have led to negative impacts on human health, the environment and the economy world wide.

Following the film, discussion will be led by Michel Cavigelli, PhD, a soil scientist at USDA who has been working in the field of sustainable agriculture for 25 years. Email for more information about this event.