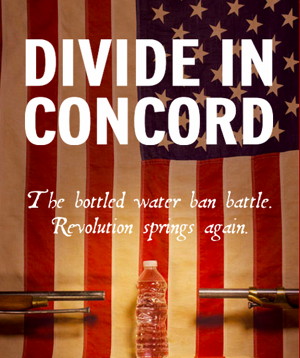 Divide in Concord is a feature-length documentary that follows the entertaining tale of the battle of banning bottled water in small town America.

In 1775, The “shot heard round the world” in Concord, MA began the American Revolution — One hundred years later, Henry David Thoreau began the Environmental Movement — and now, Concord, MA leads the latest revolution.

Jean Hill, a fiery 84-year-old widow and mother of four, wants to ban the sale of bottled water in Concord. Her path begins when her grandson tells her about the disastrous environmental effects of the empty plastic bottles. Jean presents a bylaw to ban the sale of single-serve plastic bottles at the 2010 and 2011 Town Meetings. After losing by seven votes in 2011, she vows to continue the crusade with neighbor and Harvard Law Grad, Jill Appel. If enacted, the law would be the first of its kind in the world. But all are not in agreement with the ban. Merchants are wary of the bylaw. Philanthropist, mother, model and celebrity publicist Adriana Cohen takes the fight to the spotlight, calling the ban an attack on freedom. With billions of dollars at stake, The International Bottled Water Association sends in the cavalry. The town is abuzz as Patriot’s Day celebrations begin. War re-enactors take the field, cannons fire at dawn, and the parades commence. April’s Town Meeting provides the stage for Concord’s latest battle. From the town that began America and Environmentalism, springs a new Revolution.