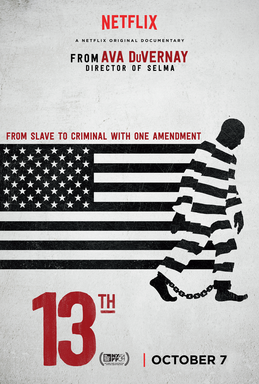 13th, Ava DuVernay’s 2016 film about race and incarceration, takes its name from the 13th amendment, which abolished slavery except as “punishment for crime.”

People of color remain dramatically overrepresented in U.S. prisons. This documentary traces current mass incarceration of African Americans to its historical origins in the Thirteenth Amendment; the clause allowing forced labor for criminals was exploited immediately in the aftermath of the civil war. DuVernay connects the abolition of slavery, through the chain gang labor that replaced it, through segregation and “the mythology of black criminality”, to the war on crime and the war on drugs to the rise in mass incarceration and the big business of prisons. Between the lines, “13th” boldly asks whether African Americans have actually ever truly been “free” in our country. This  provocative film has been justifiably nominated for this year’s Oscar.