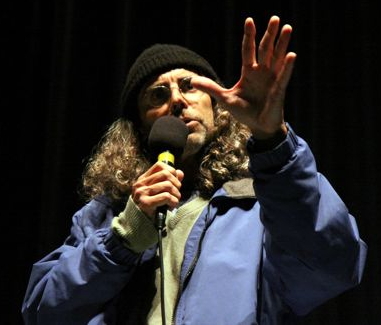 Reel and Meal will launch the new year with the documentary I AM.

I AM is an utterly engaging and entertaining non-fiction film that poses two practical and provocative questions:

The filmmaker behind the inquiry is Tom Shadyac, the leading comedy and creative force behind such blockbusters as “Ace Ventura” and “Bruce Almighty.” However, in I AM, Shadyac steps in front of the camera to recount what happened to him after a cycling accident left him incapacitated, possibly for good. Though he ultimately recovered, he emerged with a new sense of purpose, determined to share his own awakening to his prior life of excess and greed, and to investigate how he as an individual, and we as a race, could improve the way we live and walk in the world.

Ironically, in the process of trying to figure out what’s wrong with the world, he discovered there’s more right than he ever imagined. Meeting with a variety of thinkers and doers -– remarkable men and women from the worlds of science, philosophy, academia, and faith — including such luminaries as David Suzuki, Noam Chomsky, Howard Zinn, Archbishop Desmond Tutu, Lynne McTaggart, Ray Anderson, John Francis, Coleman Barks, and Marc Ian Barasch. The film gives us an opportunity to look at “human connectedness, happiness, and the human spirit,” and the “world’s ever-growing addiction to materialism” among other issues.