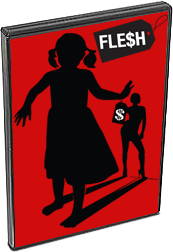 “There are more slaves than at any time in human history”
~Ben Skinner, author of A Crime So Monstrous: Face to Face with Modern-Day Slavery

FLE$H, a shocking documentary, calls into question our definitions of slavery, human trafficking, and prostitution in the United States. This is a story told by girls who have escaped and by those still enslaved. It is told by former and current pimps. It is told by the abolitionists of today, including numerous directors of non-profit organizations, a former U.S. Ambassador, LAPD vice and the L.A. City Task Force on Human Trafficking.

FLE$H goes behind the scenes of the third largest criminal industry that preys upon girls, whose average age of entry is twelve to fourteen. The interviews give voice to those in the business of prostitution and to those seeking to end it. Together they offer startling perspectives on what drives trafficking here in the U.S.

FLE$H does not end with the presentation of trafficking in the U.S. – it delves into its causes. To learn more about FLE$H, visit http://www.fleshthemovie.org/press.

The evening’s facilitators include:

“When we’re defining slavery, fundamentally at its core it’s the same in each and every circumstance. We’re talking about people forced to work held through fraud, under threat of violence, for no pay beyond subsistence. If we’re talking about forced commercial sexual slavery, forced prostitution, there’s an added element of humiliation or shame, because we’re talking about rape” (B.Skinner).

Join us to learn more about human trafficking, how it impacts residents of Greenbelt, Prince George’s County and Metro DC, and what you can do to help end human slavery.