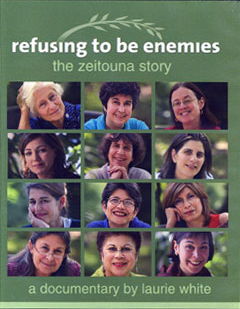 When sixty years of war and diplomacy have failed to resolve the Israeli-Palestinian conflict, can a small group of ordinary citizens succeed? This documentary profiles a self-formed group of twelve ordinary women calling themselves “Zeitouna,” the Arab word for “olive tree.” These six Arabs and six Jews weave an unusual and intimate
tapestry of sisterhood. Their journey of personal transformation may pave the way to socio-political transformation and peace. Some of the women are American-born, others are immigrants; one is a Holocaust survivor, another
is a survivor of the Nakbah’s terror; their ages span 40 years.

Rather than attempt to answer questions of right and wrong, or how to break the
deadlock of the Middle East conflict, the documentary Refusing to Be Enemies simply offers living proof of how ordinary people might succeed where diplomats and warriors have failed. Runtime is 58 minutes.

Laurie White, who is a founding member of Zeitouna and also Producer/Director of the film, will be in attendance to make comments and take questions. Discussion on the issues the film raises will be led by Kay Halpern, a concerned American Jew and an active member of a local area synagogue. For more about these issues, visit sharingjerusalem.org.

The Peace & Justice Coalition of Prince George’s County has organized this month’s program. For more information about the coalition, contact Lucy Duff (, 301-577-2350).