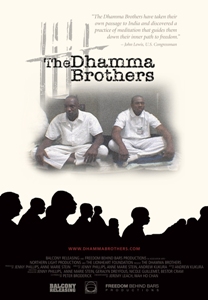 The Dhamma Brothers tells a dramatic tale of human potential and transformation as it closely follows and documents the stories of the prison inmates at Donaldson Correctional Facility as they enter into this arduous and intensive program. This film has the power to dismantle stereotypes about men behind prison bars.

This documentary deals with the story of an overcrowded, violent maximum-security prison, the end of the line in Alabama’s prison system, that is dramatically changed by the influence of an ancient meditation program. Behind high security towers and a double row of barbed wire and electrical fence live over 1,500 prisoners, many of whom will never again know life in the outside world. But for some of these men, a spark is ignited when it becomes the first maximum-security prison in North America to hold an extended Vipassana retreat, an emotionally and physically demanding program of silent meditation lasting ten days and requiring 100 hours of meditation.

Joining us for the evening will be David Oryang, the brother of one of the inmate participants in the meditation training.