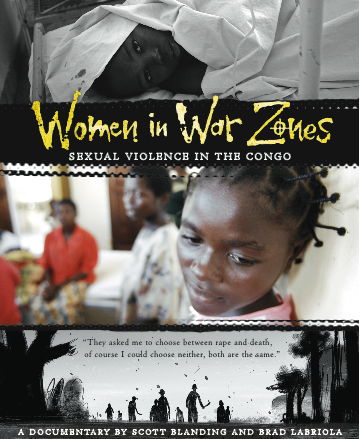 Some wars make headlines; others do not. One of the deadliest but neglected warzones takes place in the remote and lawless Democratic Republic of Congo (formerly Zaire), where 5 ½ million people have died. In the aftermath of the 1994 Rwandan civil war, refugees fled to the neighboring Congo, including the militia partially responsible for the Rwandan genocide. Despite a peace agreement signed in 2003, armed militias continue to torture, mutilate and rape hundreds of thousands of women and children in a systemic and calculated fashion to foster fear in the population and build cohesion within their own militia.

“Women in War Zones” takes place in the 400 bed Panzi Hospital along the Rwandan border, focusing on two young women, Helene and Bijoux, 22 and 13, who befriend one another during their time of treatment at the hospital, while grappling with the atrocities they experienced. Runtime is 53 minutes. For more on the brutality taking place in the Congo, see the op-ed columns of Nicholas D. Kristof in the New York Times, Feb. 4, 7, and 11, 2010.

Scott Blanding, who filmed this documentary, will be in attendance to take questions. Drawn in particular to projects relating to justice issues, it is Scott’s hope that his work will engage the audience in ways that reflects a respect for the dignity of human life and encourages compassion for others.