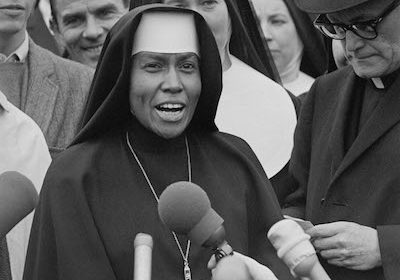 In honor of Martin Luther King Day, January’s film is Sisters of Selma. Kathy Boylan of the activist Dorothy Day Catholic Worker House in DC will speak and lead a discussion after the film. This month’s program is sponsored by the Baha’i Community of Greenbelt in conjunction with Green Vegan Networking.

In 1965, a diverse alliance of dedicated activists came together in Selma, Alabama to protest the denial of voter registration to African Americans. Among the first to join the effort was a group of Catholic nuns. Sisters of Selma chronicles the groundbreaking actions of these activist women, told through 2003 interviews. A powerful, affirming new story of faith and justice emerges.

The 2014 film Selma brought back to national awareness the memory of the nonviolent protests, and the violent official reaction that brought federal support for the culminating March to Montgomery. Soon after, the Voting Rights Act was signed into law by President Lyndon Johnson. Sisters of Selma tells the story of an unforeseen group of brave women drawn to support the cause of justice in Selma.

The Catholic Church owes much of its record of social activism to its vowed women, for whom service is the highest calling. In fact, most orders of nuns were founded for social service. It is not surprising, then, that in 1965 the sisters came to the city of Selma, Alabama, to help African-American citizens of the South fighting for their civil rights. A new generation of African Americans was challenging the status quo of the Deep South of the ’60s. These nuns of the Catholic Church joined the civil rights struggle, and in so doing, the Church and the sisters were themselves transformed.

For more information on Sisters of Selma, please contact Joy Allchin at or Cam MacQueen at .