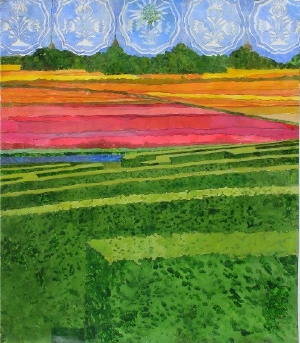 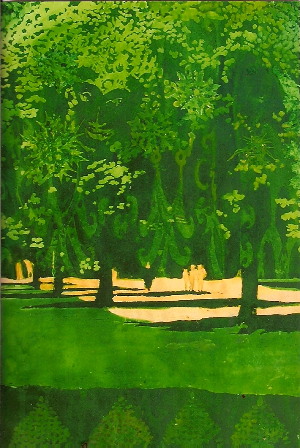 Recent Green Paintings by Barbara Stevens, on display January 5th through March 1st. Join us on Sunday, January 10th for the opening reception from 7pm to 9pm. For more information, call the cafe at 301-474-5642.

This new green-Amsterdam Series was inspired in many ways by Michael Pollan’s book “Botany of Desire” (a program about that book was recently aired on PBS.) It was this book which set Ray and Barbara Stevens on an extended adventure in the Netherlands. In Jan. 2006 we cashed in savings,bought a canal boat and then spent April through October for the most part of 2006-2008 living on a canal in the north part of Amsterdam. This new set of Green paintings comes directly from that experience.

The Green Painting Series started when we came back to Maryland after 20 years in New Mexico and it included the merging of local – indigenous -designs like in the New Mexico desert Landscapes. In the Maryland series, the trees,etc. were merged with Colonial quilts designs.

In the Maryland Green Paintings, I first explored that universal phenomenon of being able to see changing faces and various creatures-as in the clouds- but in the trees, hedges. Actually all that is organic, it seems, can produce fractal-like gestalts. In this Series from Amsterdam I feel that there has been some progress toward making the pleasure of seeing this gestalt phenomenon more accessible.

Should you wish to contact Barbara about her work, she can be reached by email at .