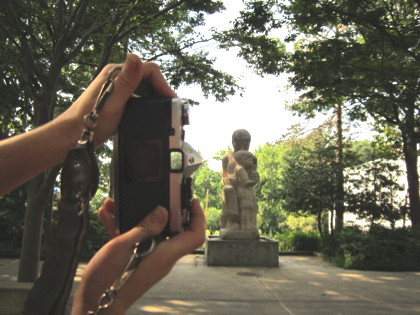 We’re hosting a group show of photographs with a Greenbelt theme from November 6, 2012 to January 7, 2013. On Sunday, December 2, there will be a public reception at the cafe featuring live music, refreshments, and the announcement of awards. Apply now!

On display at the New Deal Cafe from July 3rd through August 27th, paintings by Ingrid Cowan Hass in the back room and drawings by Eva Kritt in the front room. Join us on Sunday, August 5th from 7pm to 9pm for a reception and meet the arists! 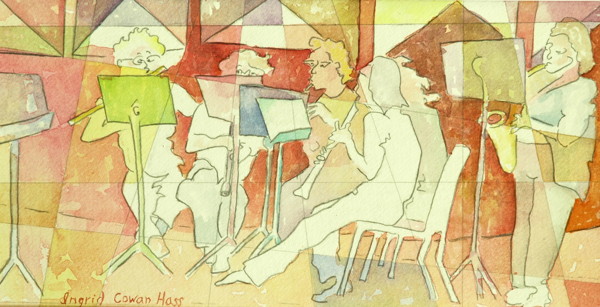 Ingrid Cowan Hass grew up in the foothills of North Carolina and has lived in Greenbelt since 1998. She majored in Studio Art with a minor in Music from Smith College in Northampton, MA, and holds a Master’s degree in Opera Performance from the School of the Arts in Winston-Salem, NC. Ingrid is a professional musician, a mezzo-soprano, and performs regularly in opera, oratorio and recital in the greater Washington, DC area. She teaches voice, piano and various art classes to adults and children. Ingrid painted the outdoor New Deal Cafe sign for the current space after the move from the Community Center.

Music and painting have always been an intricate part of my life. As a professional musician, I am busy with rehearsals, practice, or teaching, but I always have pictures and colors brewing in my head. I believe that color speaks directly to the heart and mind of a person, in a similar way that music does. Color is very often the vehicle I use to express my relationship to the subject. In this show, Summertime Tunes, many of the subjects are people making music. I always create the initial sketches while the music is happening. My mark-making and pallet are influenced by the sounds, the melody, and the beat of a performance and by the concentration and personalities of the performers. But even ‘silent’ subjects have a song. I might ask myself, “Does this still-life sound like blasting trumpets or a mellow flute?” “Is this landscape in a minor or major key?” I use the juxtaposition of many colors and geometry to show how I feel about what I am painting and to express how the painting sounds. 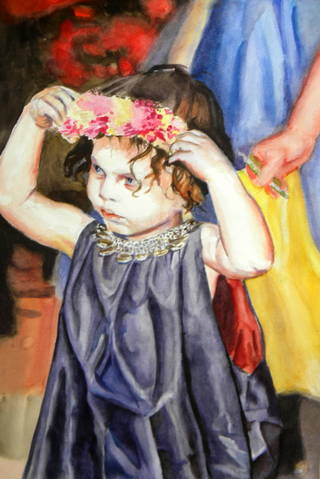 I always found people to be the most interesting subjects. My goal has been to reveal something about a person’s character and to bring out their personality through expression, facial detail and body language, and to faithfully define volume, shape and movement, and in the best case, bring him or her to life.

At The Maryland Institute College of Art, in Baltimore, where I went to school, there was a replica from the tomb of twin babies on the second floor of the Main Building. The curves of their cheeks and
mouths wrapped around voluminous faces and their eyelids seemed to flutter even though they were still. It appeared as though they could roll over at any time, pulling the sheets with them, their heads resting on soft stone pillows and their precious hands balled up into tiny fists.

I thought about this sculpture when I was drawing my daughter at 18 months of age. Her cheek rolled forward and flattened out where her face pressed against the couch cushion and her mouth puckered, falling part way open. Every so often, she took a deep breath, picked her head up, turned it to the other side and sighed. Then I drew the rest of her, waiting for her to turn her head back towards me. We won a contest in the National Newsletter for my mother’s group.

When I was a child, my grandfather took me to the Rodin exhibit at The National Gallery of Art. And as I overlooked “The Gates of Hell”, a massive bronze sculpture, I noticed that some of the figures were trying to escape, and they did so, convincingly. I wondered if, one day, I could do that.

In pursuit of this, I have spent my life drawing, painting and sculpting figures and faces. Whether fantasy or fiction, posed or referenced from photos, people are my favorite subjects.